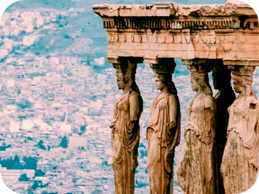 Athens s the capital and largest city in Greece. Athens dominates the Attica region and is one of the world’s oldest cities, with its recorded history spanning over 3,400 years In modern times, Athens is a large cosmopolitan metropolis and central to economic, financial, industrial, maritime, political and cultural life in Greece.
The Municipality of Athens (also City of Athens), which actually constitutes a small administrative unit of the entire city, had a population of 664,046 (in 2011)within its official limits, and a land area of 38.96 km2.

The heritage of the classical era is still evident in the city, represented by ancient monuments and works of art, the most famous of all being the Parthenon, considered a key landmark of early Western civilization. The city also retains Roman and Byzantine monuments, as well as a smaller number of Ottoman monuments. Athens is home to two UNESCO World Heritage Sites, the Acropolis of Athens and the medieval Daphni Monastery. Landmarks of the modern era, dating back to the establishment of Athens as the capital of the independent Greek state in 1834, include the Hellenic Parliament and the so-called «architectural trilogy of Athens», consisting of the National Library of Greece, the National and Kapodistrian University of Athens and the Academy of Athens. Athens is also home to several museums and cultural institutions, such as the National Archeological Museum, featuring the world’s largest collection of ancient Greek antiquities, the Acropolis Museum, the Museum of Cycladic Art, the Benaki Museum and the Byzantine and Christian Museum. Athens was the host city of the first modern-day Olympic Games in 1896, and 108 years later it hosted the 2004 Summer Olympics, making it one of the few cities to have hosted the Olympics more than oncetres 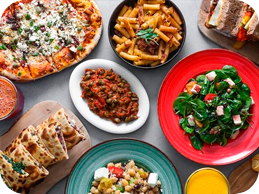 Greek cuisine is a Mediterranean cuisine.Greek cookery makes wide use of vegetables, olive oil, grains, fish, wine (white and red), and meat (including pork, poultry, veal, lamb, rabbit and beef). Other important ingredients include olives, pasta (especially hilopites, a kind of pasta similar to tagliatelle), cheese, lemon juice, herbs, bread, and yogurt. The most commonly used grain is wheat; barley is also used. Common dessert ingredients include nuts, honey, fruits, and filo pastries. It has a history of thousands of years with dishes originating from Ancient Greece, continuing into the Byzantine period and surviving until today. It has been influenced by Middle Eastern, Ottoman, and Italian cuisine and cuisines from the northern countries while also having exerted influence over these same areas throughout the years.