MundiSpainTours. Your Travel in Spain > Casablanca 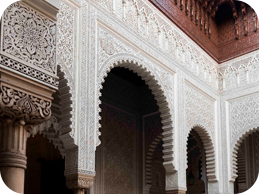 Is located in Casablanca the Hassan II Mosque completed in 1993 and located on a platform overlooking the Atlantic Ocean, the iconic Hassan II Mosque is the second-largest mosque in the world, and one of few open to non-Muslims (through selected guided tour opportunities lasting around an hour each). The mosque, which can accommodate up to 25,000 worshipers, offers Muslims the chance to pray on a glass floor, giving the unique feeling of praying directly over the sea. Everyone is welcome to admire the beautiful piece of architecture at any time from the spacious courtyard, which alone can accommodate a further 80,000 people.

Place Mohammed V
A visit to the administrative hub of Casablanca, the Place Mohammed V is a chance to experience first-hand the work of architect Henri Prost. Surrounded by public buildings which set the scene for further buildings throughout Morocco, including law courts, the square also hosts the statue of Marshal Lyautey, the first French Resident-General in Morocco from 1912 to 1925. In addition to this monumental statue, the square features a grand fountain dating back to 1976 which, at certain times of the day, hosts a music accompanied water show. 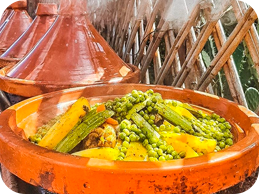 Moroccan cuisine is influenced by Morocco’s interactions and exchanges with other cultures and nations over the centuries. Moroccan cuisine is typically a mix of Berber, Arab, Andalusi, and Mediterranean cuisines
Morocco produces a large range of Mediterranean fruits, vegetables and even some tropical ones. Common meats include beef, goat, mutton and lamb, chicken and seafood, which serve as a base for the cuisine. Characteristic flavorings include lemon pickle, argan oil, cold-pressed, unrefined olive oil and dried fruits. As in Mediterranean cuisine in general, the staple ingredients include wheat, used for bread and couscous, and olive oil; the third Mediterranean staple, the grape, is eaten as a dessert, though a certain amount of wine is made in the country
Spices are used extensively in Moroccan food, common spices include cinnamon, cumin, turmeric, ginger, paprika, coriander, saffron, mace, cloves, fennel, anise, nutmeg, cayenne pepper, fenugreek, caraway, black pepper and sesame seeds