Settled in the very heart of the Iberian Peninsula, Castilla-La Mancha offers the visitors not only 2 World Heritage cities (Cuenca and Toledo), but also numerous tiny villages that hide an enormous variety of cultural heritage, archaeological sites and nature protected sports which were immortalized by Cervantes 400 years ago as scene of adventures for Don Quijote and its loyal squire, Sancho Panza.

With more than 300.000 hectares of wild nature, Castilla-La Mancha keeps a lot of Nature Reserves, and National Parks. In fact, it is one of Europe’s leading regions in that sense. Two good examples of that are Tablas de Daimiel in Ciudad Real and the National Park of Cabañeros, also in Ciudad Real bordering with the province of Toledo. This is a landscape full of forests, meadows, canyons and humidity, although this community is oddly named “The big plain of La Mancha”.

In every single corner of the 5 provinces that comprises this community a visitor will find exceptional samples of artistic and historic legacy, as Alcaraz and Chinchilla, in Albacete, Almagro in Ciudad Real, Molina de Aragón and Sigüenza in Guadalajara, or Consuegra y Tembleque in Toledo. Due to its territorial extensions, some routes have been made out in order to lead visitors to a constructive way to discover these lands (Don Quijote route, La Mancha lagoons, Romanesque route, and Itineraries through
prehistoric sites). 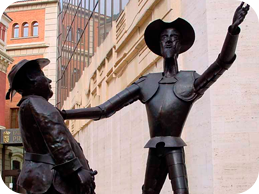 In the land of Don Quixote and Sancho Panza we will find lovely, noble, good and generous people who are proud of their traditions and their customs. 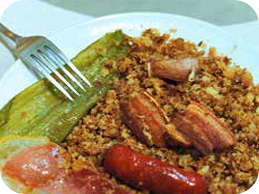 Its famous cheese should stand out, but let’s not forget the traditional migas (crumbs), the gachas (porridge), the pisto manchego (ratatouille), the garlic soups, the atacasburras (which is made of potatoes garlic and cod), or the marzipan. 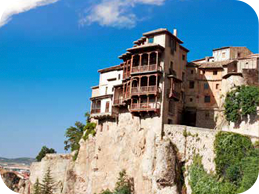 Follow the Don Quixote Route to discover this beautiful land. We also suggest the Tambordas of Hellín and Tobarra the Gancheros festivity, or the Moors and Christians Festivities.