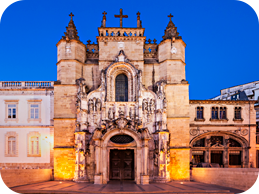 On the banks of the river Mondego, Coimbra is famous for its University, the oldest in Portugal and one of the oldest in Europe, which over time has shaped its image to become «the city of students».

We begin this visit, precisely at the university founded in the XIIIth Century and which UNESCO has placed on its list of World Heritage sites, in a classification that also includes Rua da Sofia and the upper part of the city. It’s well worth climbing its tower, which houses the bells that signal the start and end of classes, in order to appreciate the superb 360º view of Coimbra. But there is much to see at ground level, too: the Pátio das Escolas courtyard, the Sala dos Capelos hall where the most important ceremonies are held, the Chapel of São Miguel with an imposing Baroque organ and the Joanine Library, which has more than 300,000 works dating from the 16th to the 18th centuries arranged in beautiful gilt-covered bookcases. The buildings occupy the place of the Palace where the first Kings of Portugal lived, when they made the city the capital of the kingdom. 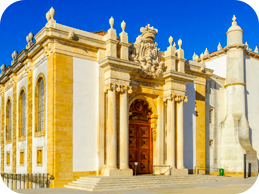 There are several monuments from those times that display the splendour of Romanesque art. In the shopping area and area of historic cafés in the City Centre, visitors really must see the Monastery of Santa Cruz, which houses the tomb of the first King of Portugal, Afonso Henriques, and on the other bank, the Monastery of Santa Clara-a-Velha, recovered and rescued from the waters of the river that invaded it over the centuries. The Sé Velha (Old Cathedral), too, on whose steps the monumental serenade takes place in which students dressed in black capes sing the Coimbra Fado with heartfelt emotion. This is one of the events in the Queima das Fitas ritual (Burning of the Ribbons) every May, in which newly graduated students celebrate the completion of their course, at a very colourful party. This liveliness is felt throughout the year, however, in the many pubs, restaurants and “Repúblicas” (student residences), examples of community life.

But there is much more to see. The Machado de Castro National Museum contains the Roman Cryptoporticus among a collection of great value that introduces you to the history of the city. There are many gardens not to be missed, too, such as those at Choupal, those at Quinta das Lágrimas, the setting for the story of D. Pedro and Inês de Castro, and the Botanical Gardens. Children (of all ages) will love Portugal dos Pequenitos (Portugal for the Little Ones), a park that reproduces the main Portuguese monuments on a miniature scale.

Coimbra is not only about tradition; it also has modern buildings that are worth knowing, such as the University’s Campus II, the Pedro and Ines Footbridge, the Centro de Portugal Pavilion in the Parque Verde do Mondego. And to get a different perspective of the whole city we recommend a boat trip on the River Mondego. 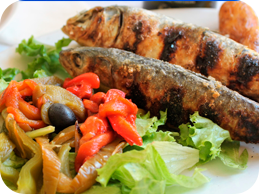 The stellar dish is cod, cooked in loads of different ways. Do not miss the sardines,
the soupy rice, the green broth, the feijoadas, the Alentejana style pork meat,
or fish caldeirada. Also, the green and the Porto wines.