The sun underlines the most remarkable feature of personality of Valencia, with a big offer for tourists that has a lot to do with hundreds of kilometres of Mediterranean shore, where you can spend unforgettable vacations by the beaches of Alicante, in Costa Blanca, the ones in Benidorm, or Valencia, or Castellón, in Costa Azahar (spanish for Orange Blossom Coast). Apart from this seaboard there is also a very peculiar orography; from the cliffs such as Sierra de Irta or Vilajoiosa, to the albuferas of Valencia and Elche, lagoons in Torrevieja and Mata, transformed into salt marshes, and important dune formations in El Saler de Valencia or the ones in Guardamar.

Can be organized some itineraries through the nature reserves, more than 20 in the community. A good example is the Parque Natural de las Salinas de Santa Pola. You can also go to the localities in Segorbe (Castellón) where stands a basilica dated from the XIII century, or discover the secrets of the church in Santiago Apóstol of Orihuela (Alicante), go for a walk through one of the biggest palm tree forests in Europe, the Palmeral of Elche, declared UNESCO World Heritage Site. In fact, all three provinces, Castellón, Valencia and Alicante, embody an excellent wide range of unforgettable routes, all along the seaboard and also inland. All of them made to know and enjoy this historic community. The most deep-rooted folkloric traditions are represented in the popular fiestas world wide known, such as Fallas of Valencia and Moros y Cristianos (moors and Christians), in Alcoy. Therefore you will find a cuisine that takes rice as its main ingredient. 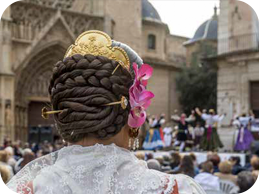 The Valencians are perseverant and very respectful of their customs. They stand out for their Mediterranean character, as they are open and uninhibited. They are good eaters and they love any excuse to meet friends for lunch or dinner. Moreover, they are lovers of fire and music. 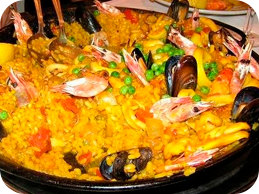 Land of rice: Paella, a banda, baked, del senyoret, socarrat, soupy… To the consumer’s preference. But you also need to try rossejat or fideuá, esgarraet, sweet fritter, els fartons, nougat from Alicante or Xixona, and horchata.

Of course Las Fallas and its mascletàs. It is also important the festival of San Juan and its bonfires, the Tomatina of Buñol, the Moors and Christians festivity of Alcoy, the Festival of Rice, or the Elx Mistery.