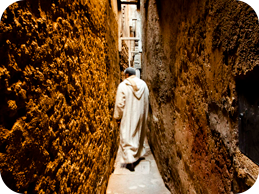 Fez is the second largest city in Morocco after Casablanca, with a population of 1.7 million (2020). Located to the northeast of Atlas Mountains, Fez is situated at the crossroad of the important cities of all regions; 206 km (128 mi) from Tangier to the northwest, 246 km (153 mi) from Casablanca, 189 km (117 mi) from Rabat to the west, and 387 km (240 mi) from Marrakesh,today, the city largely consists of two old medina quarters, Fes el Bali and Fes Jdid, and modern urban area of Ville Nouvelle constructed during the French colonial era. 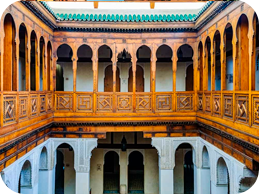 The medina of Fez is listed as a World Heritage Site and is believed to be one of the world’s largest urban pedestrian zones (car-free areas). It has the University of Al Quaraouiyine which was founded in 859 and the oldest continuously functioning university in the world. It also has Chouara Tannery from the 11th century, one of the oldest tanneries in the world. The city has been called the «Mecca of the West» and the «Athens of Africa,» a nickname it shares with Cyrene in Libya. 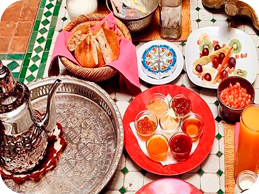 Moroccan cuisine is influenced by Morocco’s interactions and exchanges with other cultures and nations over the centuries.[1] Moroccan cuisine is typically a mix of Berber, Arab, Andalusi, and Mediterranean cuisines
Morocco produces a large range of Mediterranean fruits, vegetables and even some tropical ones. Common meats include beef, goat, mutton and lamb, chicken and seafood, which serve as a base for the cuisine. Characteristic flavorings include lemon pickle, argan oil, cold-pressed, unrefined olive oil and dried fruits.[2] As in Mediterranean cuisine in general, the staple ingredients include wheat, used for bread and couscous, and olive oil; the third Mediterranean staple, the grape, is eaten as a dessert, though a certain amount of wine is made in the country
Spices are used extensively in Moroccan food, common spices include cinnamon, cumin, turmeric, ginger, paprika, coriander, saffron, mace, cloves, fennel, anise, nutmeg, cayenne pepper, fenugreek, caraway, black pepper and sesame seeds