La Rioja is named, definitely after its wine. Bathed by the rivers Oja and Ebro, this region presents a wide offer of wine tourism that will make happy those visitors who are coming to this land: more than 500 wineries (most of them centenaries) spread throughout the fertile lands of this community and are an excellent lure for those who want to go into the depth in Oenology culture.

But La Rioja is much more. Nature lovers will enjoy a lot with their landscapes, from the fertile lands at the north, in the valleys of Rioja Baja (Low Rioja), homeland of some of the most wellknown collections of dinosaur tracks all over the world. They are, in fact, an important legacy for international palaeontologists.

La Rioja is a land made out of different art and culture remnants. This singularity is represented in monasteries such as the one in Suso, in San Millán de la Cogolla, cradle of the first known written words in ancient Spanish language. Other samples of this legacy are the dolmens in Sierra de Cameros, the innumerable castles spread through the community, the roman cities remainders, and the tracks of celtiberian tribes in Ebro Valley. 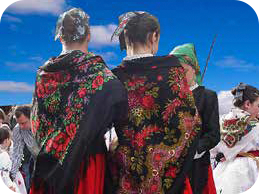 In La Rioja you need to enjoy its landscape and, above all, its villagers. People from La Rioja are noble, determined, honest, kind and hospitable. It is a place with welcoming people and a great quality of life. 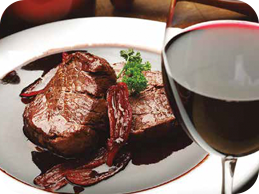 You should not miss a menu with potatoes or eggs riojana style, roasted red peppers, fritada, picadillo, trout or cod riojana style, lamb chops Sarmient, peaches with wine, or fardalejos. All complemented with a good Rioja wine. 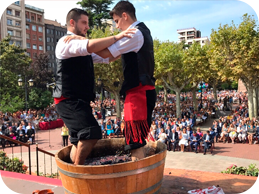 The most popular festivities are Fiesta of la Vendimia, Fiestas de Santo Domingo de La Calzada, the Picaos of San Vicente, the Battle of wine, the San Bernabé festivity, and the Bread and Cheese Festivals of Quel.