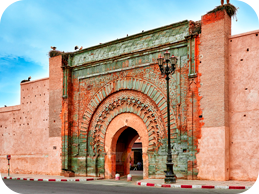 Marrakesh is the fourth largest city in the Kingdom of MoroccoIt is the capital of the mid-southwestern region of Marrakesh-Safi. It is located west of the foothills of the Atlas Mountains. Marrakesh is situated 580 km (360 mi) southwest of Tangier, 327 km (203 mi) southwest of the Moroccan capital of Rabat, 239 km (149 mi) south of Casablanca, and 246 km (153 mi) northeast of Agadir. 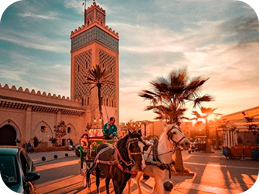 Marrakesh comprises an old fortified city packed with vendors and their stalls. This medina quarter is a UNESCO World Heritage Site.[6] Today it is one of the busiest cities in Africa and serves as a major economic center and tourist destination. Tourism is strongly advocated by the reigning Moroccan monarch, Mohammed VI, with the goal of doubling the number of tourists visiting Morocco to 20 million by 2020. In Marrakesh are located four mosques: Koutoubia Mosque , Ben Youssef Mosque . Kashbah Mosque and Mouassine Mosque.
Museum of Moroccan Arts

The Marrakech Museum, housed in the Dar Menebhi Palace in the old city centre, was built at the end of the 19th century by Mehdi Menebhi. The palace was carefully restored by the Omar Benjelloun Foundation and converted into a museum in 1997.
The house itself represents an example of classical Andalusian architecture, with fountains in the central courtyard, traditional seating areas, a hammam and intricate tilework and carvings.

Dar Si Said Museum, also known as the Museum of Moroccan Arts is located to the north of the Bahia Palace. The collection of the museum is considered to be one of the finest in Morocco, with «jewellery from the High Atlas

The Museum of Islamic Art is a blue-coloured building located in the Marjorelle Gardens. The private museum was created by Yves Saint Laurent and Pierre Bergé its small exhibition rooms have displays of Islamic artifacts and decorations including Irke pottery, polychrome plates, jewellery, and antique doors. 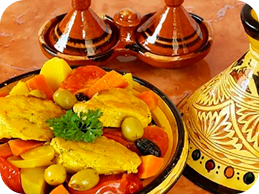 A specialty of the city and the symbol of its cuisine is tanjia marrakshia a local tajine prepared with beef meat, spices and «smen» and slow-cooked in a traditional oven in hot ashes.Tajines can be prepared with chicken, lamb, beef or fish, adding fruit, olives and preserved lemon, vegetables and spices, including cumin, peppers, saffron, turmeric, and ras el hanout. The meal is prepared in a tajine pot and slow-cooked with steam. Another version of tajine includes vegetables and chickpeas seasoned with flower petals