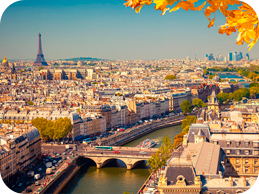 Paris (is the capital and most populous city of France, with a population of 2,148,271 residents (official estimate, 1 January 2020) in an area of 105 square kilometres (41 square miles).Since the 17th century, Paris has been one of Europe’s major centres of finance, diplomacy,
commerce, fashion, science and arts. The City of Paris is the centre and seat of government of the Î le-de-France, or Paris Region, which has an estimated official 2020 population of 12,278,210, or about 18 percent of the population of France.

The city is a major railway, highway and air-transport hub served by two international airports: Paris-Charles de Gaulle (the second busiest airport in Europe) and Paris-Orly. Opened in 1900, the city’s subway system, the Paris Métro, serves 5.23 million passengers daily it is the second busiest metro system in Europe.

Paris received 24.5 million visitors in 2018, measured by hotel stays, with the largest numbers of foreign visitors coming from the United States, the United Kingdom, Germany and China. It was ranked as the second most visited travel destination in the world in 2018 Culture 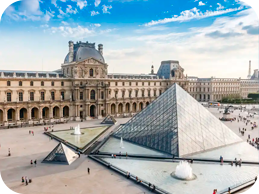 The Louvre received 9.6 million visitors in 2019, ranking it among the most visited museums in the world.Its treasures include the Mona Lisa (La Joconde), the Venus de Milo statue, Liberty Leading the People. The second-most visited museum in the city, with 3.5 million visitors, was theCentre Georges Pompidou, also known as Beaubourg, which houses the Mus é e National d’Art Moderne.The third most visited Paris museum, in a building constructed for the Paris Universal Exhibition of 1900 as the Orsay railway station, was the Musée d’Orsay, which had 3.3 million visitors in 2018.The Orsay displays French art of the 19th century, including major collections of the Impressionists and Post-Impressionists.

The Musée de l’Orangerie, near both the Louvre and the Orsay, also exhibits Impressionists and Post-Impressionists, including most of Claude Monet’s large Water Lilies murals. The Musée national du Moyen Âge, or Cluny Museum, presents Medieval art, including the famous tapestry cycle of The Lady and the Unicorn. The Guimet Museum, or Musée national des arts asiatiques, has one of the largest collections of Asian art in Europe. There are also notable museums devoted to individual artists, including the Musée Picasso, the Musée Rodin and the Musée national Eugè ne Delacroix 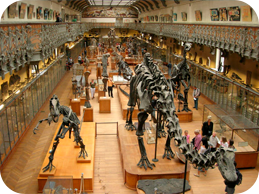 Paris hosts one of the largest science museums in Europe, the Cité des Sciences et de l’Industrie at La Villette. It attracted 2.2 million visitors in 2018.

The National Museum of Natural History located near the Jardin des plantes attracted two million visitors in 2018.It is famous for its dinosaur artefacts, mineral collections and its Gallery of Evolution. The military history of France, from the Middle Ages to World War II, is vividly presented by displays at the Musée de l’Armé e at Les Invalides, near the ​tomb of Napoleon. In addition to the national museums, run by the Ministry of Culture, the City of Paris operates 14 museums, including the Carnavalet Museum on the history of Paris, Mus é e d’Art Moderne de la Ville de Paris, Palais de Tokyo, the House of Victor Hugo, the House of Balzac and the Catacombs of Paris.There are also notable private museums; The Contemporary Art museum of the Louis Vuitton Foundation, designed by architect Frank Gehry, opened in October 2014 in the Bois de Boulogne. It received 1.1 million visitors in 2018. 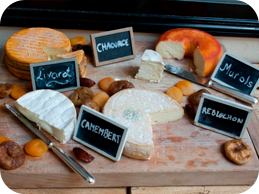 France is internationally recognised for its gastronomy and way of life. Since 2010, the French gastronomic meal and its rituals have been recognised as an intangible UNESCO cultural heritage. The special attention paid to the pleasures of the table can also be found in everyday life. The French are very attached to the three-meal day. Traditionally, breakfast is eaten in the morning, lunch at around 1 pm and dinner at around 8 pm.

In France, wine is the perfect companion of gastronomy. It highlights the dishes and awakens the taste buds. There are vineyards everywhere: in the Bordeaux region, Burgundy, Alsace, the Rh ô ne valley, the Loire valley and the Mediterranean coast. There are even a few in Paris, on the heights of Montmartre. Visit the countryside and try its wines as you sample its cuisine. But always in moderation, of course.