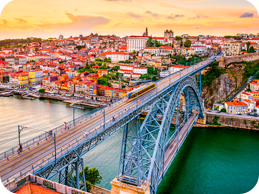 Porto is a busy industrial and commercial center. The city itself isn’t very populous (about 250,000 inhabitants), but the Porto metropolitan area (Greater Porto) has some 1,500,000 inhabitants in a 50 km radius, with cities like Gaia, Matosinhos, Maia, and Gondomar.

The city was built along the hills overlooking the Douro river estuary, and its historical center was awarded World Heritage status by UNESCO in 1996. It has been continuously inhabited since at least the 4th Century, when the Romans referred to it as Portus Calle

Porto has a semi-Mediterranean climate, although it’s strongly affected by the Atlantic ocean, which makes it cooler than other cities with this climate. However, temperatures can rise as high as 40ºC in August during occasional heat waves. Winters are mild and humid, with occasional cold nights where temperatures can drop below 0ºC. 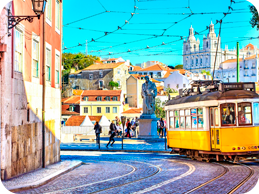 The capital of Portugal, Lisbon (Portuguese: Lisboa) has experienced a renaissance in recent years, with a contemporary culture that is alive and thriving and making its mark in today’s Europe. Perched on the edge of the Atlantic Ocean, Lisbon is one of the rare Western European cities that face the ocean and uses water as an element that defines the city. Lisbon enchants travelers with its white bleached limestone buildings, intimate alleyways, and an easy going charm that makes it a popular year round destination.

The sparkling new Lisboa Ask Me Centre (Pç. do Comércio, Tel. +351 (21) 031-2815, open 9AM – 8PM daily) will help you find accommodation and the staffs are happy to dispense advice, maps and brochures. Smaller Ask Me Lisboa kiosks are dotted about the Rossio district and airport and their multilingual staff also have maps and brochures. 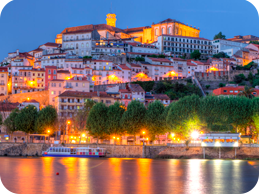 Coimbra is a city in Central Portugal .It is the main city in the Centro region.

All of the trains connecting Porto and Lisbon stop at Coimbra- B; about 1h00 from Porto and about 1h 45m from Lisbon. Long distance services only serve Coimbra B station (away from city center) but all tickets include a 5 min train ride to Coimbra A (center of Coimbra)»Baixa de Coimbra»{downtown}. Fast train only stop at Coimbra-B station, while Coimbra, or Coimbra-A is right in the city center. Train times (from any location) can be found on the National Rail – CP