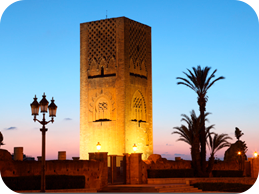 Rabat s the capital city of Morocco and the country’s seventh largest city with an urban population of approximately 580,000 and a metropolitan population of over 1.2 million. Rabat is located on the Atlantic Ocean at the mouth of the river Bou Regreg, opposite Salé, the city’s main commuter town.
Rabat was founded in the 12th century by the Almohad ruler Abd al-Mu’min as a military town it is one of four Imperial cities of Morocco, and the medina of Rabat is listed as a World Heritage Site. 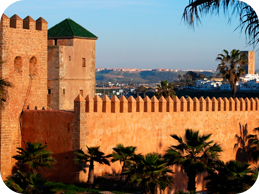 King’s Palace
Almost every big city in Morocco has a palace ready for the arrival of the King as a guest. However, the Palace in Rabat is King Hassan II’s official residence, and was built upon the ruins of an 18th-century palace. Home to many government offices, as well as quarters for the Royal Family, it is an important city building. While visitors cannot enter the main grounds, admiring the palace from the central pathway is still special.
Andalusian Gardens
The Andalusian gardens, also home to the Palace Museum which showcases fascinating exhibits demonstrating Moroccan art and culture, are a must-visit in Rabat. The beautiful gardens were built by the French in the 20th century, and have traditional Andalusian flowers and shrubs, complete with orange, lemon and banana trees. A refreshing and relaxing retreat away from the crowds, this tranquil oasis allows visitors to wander and admire the nature.
Old Medina
The old medina is something that cannot be missed from any list of things to do in a Moroccan town or city. It is by far the best place to get traditional Moroccan souvenirs, and really experience the heart of the city. Here you can haggle for the best prices and take in the sights, sounds and scents. Thankfully, Rabat is a much calmer and easy going city in comparison to cities such as Marrakech and Casablanca. This makes the old medina less chaotic and slightly more accessible. It allows visitors to experience the true Morocco in a more relaxed fashion, with wider streets and a less bustling environment 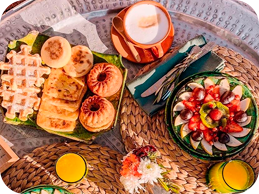 Moroccan cuisine is influenced by Morocco’s interactions and exchanges with other cultures and nations over the centuries.[1] Moroccan cuisine is typically a mix of Berber, Arab, Andalusi, and Mediterranean cuisines
Morocco produces a large range of Mediterranean fruits, vegetables and even some tropical ones. Common meats include beef, goat, mutton and lamb, chicken and seafood, which serve as a base for the cuisine. Characteristic flavorings include lemon pickle, argan oil, cold-pressed, unrefined olive oil and dried fruits. As in Mediterranean cuisine in general, the staple ingredients include wheat, used for bread and couscous, and olive oil; the third Mediterranean staple, the grape, is eaten as a dessert, though a certain amount of wine is made in the country
Spices are used extensively in Moroccan food, common spices include cinnamon, cumin, turmeric, ginger, paprika, coriander, saffron, mace, cloves, fennel, anise, nutmeg, cayenne pepper, fenugreek, caraway, black pepper and sesame seeds