Warning: "continue" targeting switch is equivalent to "break". Did you mean to use "continue 2"? in /homepages/46/d378647086/htdocs/mundispain/wp-content/plugins/revslider/includes/operations.class.php on line 2715

Warning: "continue" targeting switch is equivalent to "break". Did you mean to use "continue 2"? in /homepages/46/d378647086/htdocs/mundispain/wp-content/plugins/revslider/includes/operations.class.php on line 2719

Warning: "continue" targeting switch is equivalent to "break". Did you mean to use "continue 2"? in /homepages/46/d378647086/htdocs/mundispain/wp-content/plugins/revslider/includes/output.class.php on line 3615
 Travel to Spain. 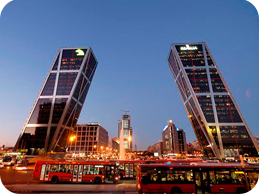 Madrid[1]is the capital and largest city ofSpain, as well as the capital of the autonomous community of the same name (Comunidad de Madrid). The population of the city is roughly 3.3 million with a metro area population of almost 6.5 million. Madrid is best known for its great cultural and artistic heritage, a good example of which is the El Prado museum. Madrid also boasts some of the liveliest nightlife in the world.

Madrid is located just northeast of the geographical center of theIberian Peninsula, in the middle of the Spanish central Castillian plateau (Meseta central), at an average altitude of 650m. Nearly all of the most famous tourist areas are located in the center of the city including Puerta del Sol, Plaza Mayor, Palacio Real, and Plaza de Colón. The major streets in Madrid include the Gran Via, Alcalá Street, and Paseo de la Castellana. 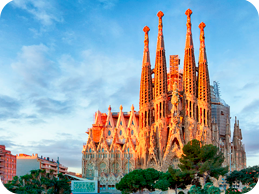 Barcelona is a huge city with several district articles containing sightseeing, restaurant, nightlife and accommodation listings — consider printing them all.

Barcelonais Spain‘s second largest city, with a population of nearly one and half million people (nearly five million in the metropolitan area) and the capital and largest city ofCatalonia.

This city, located directly on the northeastern Mediterranean coast of Spain, has a rich history dating back at least 2,000 years when it gained prominence as a Roman town under its old name,Barcino.

In 1992, Barcelona gained international recognition by hosting the Olympic games which brought a massive upturn in its tourism industry.

This had the effect of changing the city in ways that are still felt today with neighbourhoods renovated (and in some cases levelled) and the intense focus of modern design permeating all aspects of life in Barcelona from public buildings to something as simple as a park bench or an event poster. 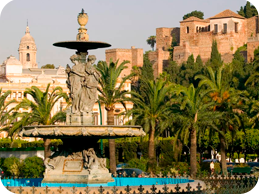 Malaga[1]is a large city in the southernSpanishregion ofAndalucíaand capital of theMalaga Province. The largest city on theCosta del Sol, Malaga has a typical Mediterranean climate and is also known as the birthplace of the artist Picasso. The city offers beaches, hiking, architectural sites, art museums, and excellent shopping and cuisine. While more laid back than Madrid or Barcelona, Malaga is still the center and transport hub for the hugely popular Costa del Sol region, which is flooded with tourists in the summer, and the city has certainly cashed in on the sun and sand, with lots of new construction as well as hotels and facilities geared to tourists. However, Malaga also offers some genuinely interesting historical and cultural attractions in its old city and its setting on the coast is still beautiful. 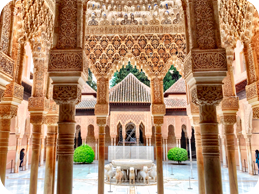 Granada[1]is a mid-sized city located inGranada Provincein theAndaluciaregion ofSpain. Rich in history and culture, Granada is arguably the single most worthwhile city in Spain for a tourist.

In addition to a rich multicultural history, the Alhambra and other monuments, a student-driven nightlife, and skiing and trekking in the nearby Sierra Nevada, Granada offers a break from the summer heat of other Andalusian cities such as Córdoba or Seville. Spring and Fall are also both excellent times to visit. With much more cultural interest than other cities likeMalaga, Granada is never overcrowded (although one should still book tickets to the Alhambra at least one day in advance). 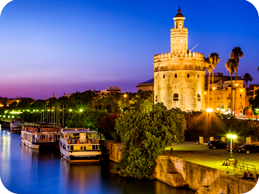 Seville(Spanish:Sevilla)[1]is the capital ofAndaluciaand the cultural and financial centre of southernSpain. A city of just over 700,000 inhabitants (1.6 million in the metropolitan area, making it Spain’s 4th largest city), Seville is Andalucia’s top destination, with much to offer the traveler.

The city is situated on the banks of the smooth, slow Guadalquivir River, which divides the city into two halves:SevillaandTriana. The Guadalquivir (known asBetisby the Romans and asBetik Wahd-Al-Khabirby the Arabs) has had a major impact in the history of the city. The location of Seville is roughly coincident with the point where the Guadalquivir stops being useful for navigation. It is at this point that the cereal producing region of the Guadalquivir Valley starts, and Seville has acted as a sea-port for commerce of agricultural goods produced further west. Intense trade existed in the area from Roman times, continued under Muslim rule, and exploded as Seville monopolized the new trade with the Americas. As the monopoly was broken andCádizlargely took Seville’s place, the city entered a period of relative decline. 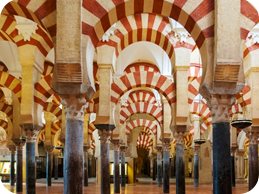 Cordobais a mid-sized city of 350,000 inhabitants and the capital of the province of Cordoba, situated in the center of AndaluciainSpain. A great cultural reference point in Europe, this ancient city has been declared a World Heritage Site and contains a mixture of the diverse cultures that have settled it throughout history.

Very few places in the world can boast of having been the capital of a Roman province (Hispania Ulterior), the capital of an Arab State (Al-Andalus) and a Caliphate. Such splendor is palpable in the intellectual wealth of this city, that has seen the birth of figures like Seneca, Averroes, and Maimonides. The historic quarter of Cordoba is a beautiful network of small streets, alleys, squares and whitewashed courtyards arranged around the Mezquita, which reflects the city’s prominent place in the Islamic world during medieval times.